100 posts in 100 days has been a challenge, a learning experience, an experiment, fun, hard, grueling, powerful and an eye opener in many unexpected ways. But I wanted to get into the numbers because they’re pretty amazing … and I’m just into stats and numbers and they’re fun, make it a game, give you something to measure with.

If I’m measuring in pure life accomplishments, I’m off the charts.

I started with a simple goal in mind: Write Every Day for 30 days. After 30, I didn’t see a reason to stop. I charted my progress on my Pass the Sour Cream site. My own rules were just actually hit Publish every day so it would be public. I run several websites so I allowed myself to publish on any of them, on any topic, of any length. My own (secret) rule was that I didn’t want to publish garbage. I tried to write as if I were writing for a paid position for a magazine or publication.

Pass the Sour Cream (passthesourcream.com) was the platform for most of the posts. I find the chart above amazing. No, it’s not from 0 to 1 million to 2 million, but that’s not what I’m looking for. I’m just looking for growth and frankly, seeing what happens. I also think it’s kinda funny that I have worked a grand total of zero hours on the design of the site … although I plan to.

Traffic doubling every month! Let’s see how long that can last.

What began as something of a game or a challenge became my platform for everything having to do with priorities, perspective, and perseverance. However, it gets personal, I start writing quite a bit about kids, parenting, dieting, health, in a more casual way, but still with magazines, journals or other publications in mind. In mid-December, Repossible was born through The Cream and I started focusing on posts over there. What has been interesting has been which posts are most popular over at The Cream:

They each have a defined and easy-to-understand goal or challenge: write, lose weight, start something new.

It’s super interesting to see where the traffic is coming from. At Repossible (repossible.com), most of the traffic came from Twitter (and e.g. TweetDeck). Because the site was born on 12/12/12, it’s barely on Google’s radar, so it’s not going to get any search traction. But, as I get into below with Twitter, Repossible for me was something I couldn’t stop talking about at parties–on and offline.

I’m going to focus in 2013 on building out the Repossible brand and get some help with guest posting, products, and we’ll see where it goes. For now, it’s exciting that it’s born and I can’t wait for it to have a personality of its own.

This increase at WordPress U (wpu.me) was quite a surprise. This is my own project for my WordPress website design day job where I just want to have a place where my clients can get help with their WordPress sites. I’m not looking to necessarily fill the whole WP tutorial market, but I’d like my clients to be able to go here and figure out what they need to do. It’s currently quite specific to tools I use (e.g. WOO Canvas).

This is another example of my “Just Get Started” strategy which doesn’t involve important steps such as design. I’m looking forward to building out the design of this site and making the user experience friendlier. For now, it’s just a place my clients can go to figure out a few things. However, it does have some traction in search as I have a few specific topics in there. A variety of topics make up the top three:

The fact that traffic is steadily on the rise gives me hope that I can turn this into an income stream at some point. Soon.

Likoma (likoma.com) has been around for years and years and gets a boatload of steady traffic that is hard to budge (up or down). That little boost in January is encouraging, but frankly, that site is mostly a portfolio site now and it’s the (old) useful, helpful, techy tutorials that bring in most of the traffic. I’ve been adding that kind of new content to WPU of late–and it shows. Building the Likoma traffic is also not a goal for me at the moment. 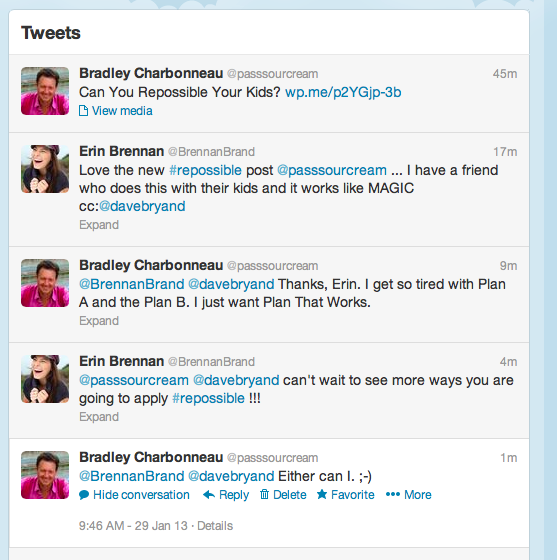 I’m a new kid on the Twitter block. A friend said it was just a big cocktail party and anyone was invited. OK. But I didn’t want to go. I didn’t have anything to say, well, in an online-y cocktail-y way. But the reasoning is quite clear: I didn’t want to talk about WordPress and website design. But once I started in on more interesting topics (juice fasting, writing every day challenges, and then Repossible), I had plenty to say. It’s quite simple: I’m passionate about it.

At in-person cocktail parties, I talked ears off of friends about Repossible, how it was born, what it might become. They jumped right in as if it were something they knew, understood, and could get behind. They did. I have a few guest posters lined up already thanks to cocktail parties–online and off.

For me, Twitter is a bit of a new world (I know, I arrived late to the party). It’s fun in there and I’m looking forward to being more active.

Above is a screenshot that is the poster child for how Twitter works, at least in my opinion.

It’s the same deal as elsewhere in marketing, it’s just another outlet. It’s just a fun, immediate, and cool one. 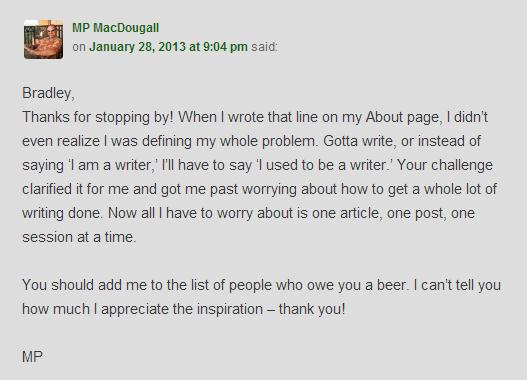 Had I never started Pass the Sour Cream, I would have never received a comment like this from MP MacDougall because he never would have found me because I was nowhere to be found. But just this line has been worth my 100 days:

“I can’t tell you how much I appreciate the inspiration–thank you!”

It’s the same simple formula that we know works. The hardest part is step one:

Had The Cream not been started, I never would have founded Repossible. Had Repossible never been around, MP MacDougall would not have been inspired. He’s on his way to Writing Every Day. We’re now on a journey together. Who knows (spoiler alert: no one) where it will take us. But I can’t wait to get there.