iPad for the Kids

We got my son an iPad Mini for his 10th birthday. The best gift ever … or worst?

This follows an extremely pro-technology write-up called “An iPad for Oma” (grandma). I’ll try (hard) to be positive here …

I’d love to make a tongue-in-cheek ad for tablets with kids staring at their screens, tongues hanging out, drool sliding down their chins, eyes aglaze and ablaze while they shoot rockets or jump subway trains or even build castles with low-res bricks. You try to wrench away the devices from their hands, but it pulls the skin from their fingers and blood oozes out, but they don’t notice … unless it gets on their screen and blocks their playing view. But they just wipe it away and continue playing. If you do manage to surgically remove the device, there follows a tantrum as if you said they weren’t going to be tortured by math professors for the entire weekend. Screaming and wailing along the lines of war footage when news of fallen soldiers reaches family members. It is quite near the end of the world.

We all know it as parents. Take away something the kids want. Heck, take away someone adults want and we might not react all too kindly either. But what it is about those screens? There have been studies that say that video games for kids actually helps them (eye-hand coordination, motor skills, learning, etc.) but others that say they promote violence and reduce imagination and social interaction. Yep, I bet they’re both right.

But when the Atari 2600 came out, I’m know I was as glued to the screen as my kids today. I think we played until our fingers ached trying to maneuver that simple joystick with the single red button. Did my parents protest? Did they have to rip that console out of the wall to get us to stop? Was it so bad for us then? Is it bad for them now?

I know this topic has been discussed to death, but it’s just so prevalent in our household. Especially now over the holidays with nieces (and their devices) and more and more accessible technology. Am I just so far inside of the Normal Rockwell painting where I think we should be caroling down the snowy avenue and come home and bake cookies and trim the tree? Well, we do that too. But then it’s screen time and … it seems to wipe it all out.

So what’s the difference between the kids and oma? Is it just maturity? Just with age? Just some aspect of self-control and limits? Yes, I suppose it’s mostly that. But why does it bug me so much? Away for the weekend with another family and four boys on the couch all with glowing devices in their hands and I just cringe. I just hate it. I try to be adapting, I even try to play their games together with them (I especially like Asphalt 8, but much because we can play together). It’s fun, until I’m ready for something else and they’re not.

So who’s problem is it anyway? Do I need to just Get Over It and accept that it’s the way it is? Should I just leave them to their own (pun intended) devices and play electronics all day? Why do I struggle with this so?

If you’re in the same boat, hopefully I can offer some advice–although I’d love to hear yours as well. What’s worked has been strict limits on when (exactly) is screen time. The best has been … the least. Not just for us, but then they look forward to it and really enjoy when it is time. This may sound like a very limited time, but it’s worked:

Call it what you will–bribes, time earned, work–but hey, as adults, we live by a similar model. We work, we get money, we can do what we want with that money. When children earn something, they appreciate it more. We’ve had a hard time with the plain arithmetic of this (how much work equals how much screen time etc.), but when we do use a system, it does work. The children also appreciate their time earned that much more. They work (clean up, homework, do something constructive, etc.) and they earn time for their devices (e.g. an extra half hour in the weekend). They learn the value of work (or earning something) and they benefit from their work. It’s win win.

The hardest part about this usually comes down to the parents “enforcing the system.” Enforcing is too strong of a word, even just managing. How much time did he spend cleaning the kitchen? How much time does that calculate into for the weekend? Where are we now? You need a spreadsheet. When you do it, it works, but it’s up to you to do it.

We forget that these devices are powerful computers. When my wife and I discussed (at length and over a period of months) getting the iPad for our soon-to-be 10-year old, we talked also about the non-games on there. They need to learn how to touch type. I enjoy making iMovies of a holiday–and I did it once with my son and he really enjoyed it. He now could make his own movies–and learn movie production. He has a camera now in the device. He does watch Dutch (youth) news programs. It’s not all bad … 😉

It’s morning and time for a walk with the dogs … and kids … and adults. Out in that fresh air stuff where there is no WiFi, no electricity, and no screens. 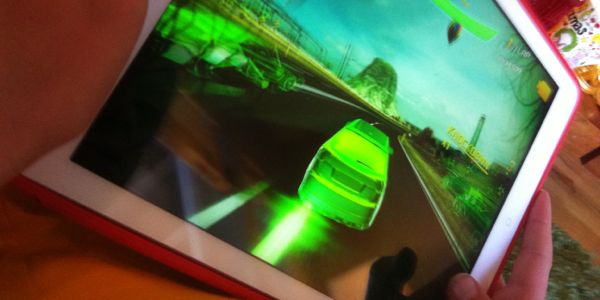 When can you get an iPad for a child? Never?