Late Christmas gift for your child? How about a Kindle? It’s multiple books in my kid’s hands, thank you. 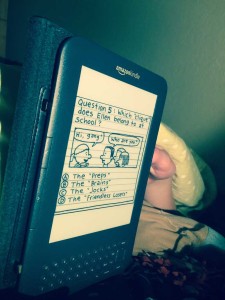 Pick a Kindle, any Kindle.

I finally got my youngest son (9-years old, pretty much now world famous thanks to his role as Li in the Markree Castle series) a Kindle.

Pick a Kindle, any Kindle.

Continuing my strategy of “Whatever Works” parenting, I finally convinced him to accept my old Kindle (really old, the one with the keyboard) because I would load some Big Nate’s on there as many of them were on sale. I bought five of them even though I had no idea how a cartoon book would work on the Kindle. It turns out, it works great!

DISCLAIMER: I don’t work for Amazon, but I do love their Kindle product. I’m a huge Kindle fan myself and happy that my kids now both have one.

The first page is viewed as the four blocks of the page but then when you go to the next page, you get a close-up of the first block on the page and then to the next one and next one. It’s perfect.

He’s tearing through them and is constantly letting me know about his favorite parts. I actually quite like Big Nate and I think it’s often really funny.

He has said for some time that he didn’t want a Kindle even though he was the only one in the family who didn’t have one. He reads books all the time, like walking-down-the-street-and-walking-into-telephone-poles all the time. I’m more than happy to supply him with books, but he goes through them SO quickly that (1) they’re expensive, (2) they’re hard to get at bookstores, and (3) we have to then store them (or give them away).

I’m a recent Kindle convert and used to be a, “No way, I’ll never read anything that’s not a real book.” kind of guy. But I just changed. Now there’s no looking back.

Even his brother is happy with his brother’s Kindle as it doesn’t need his reading light which keeps him awake. Now he can read his Big Nate’s (and other books soon) with his little fold-out light until his little eyes close to end anther day.

Now I can go open my Kindle Voyage and see what Rogue Lawyer is up to. Goodnight!