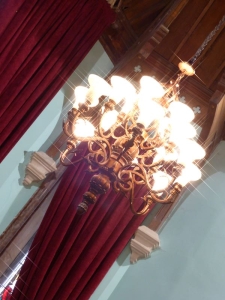 They finally get to eat, but their conversation is overheard.

The bangers and mash arrived and discussion skidded to a halt. There were no more questions of menus, cheeseburgers or magic. They weren’t talking, but it didn’t mean their minds weren’t racing.

Dan was so sure in his conviction, his belief in magic, it left Li pondering if it could be possible. Yes, he was older and wiser than Dan, but only by a number of short years. Could it be that they had magic in China that Dan and Dec knew about that Li and Lu didn’t? Could they have magic in Ireland or at least in an old castle? If it existed anywhere, this would be a logical place for it to be. What was magic, anyway? Is it just something from movies and books? Is it all really magic wands, witches with potions and invisible cloaks? Or was it something more subtle, maybe something as simple as a secret under a castle and the story behind it? What did it mean, magic? These were the thoughts that swirled through Li’s brain as he chewed.

“This is the best bangers and mash I’ve ever had in my entire life,” Lu said, eyes closed and purring like a kitten.

“It’s also the only bangers and mash you’ve ever had in your entire life,” Li reminded him. Every bite was more and more delicious and as they scooped and chomped, sipped and slurped, the only question dancing above their heads was if there was more. Soon though, thoughts of what to do next came up in all of their minds.

“Do you guys want to play soccer out on the grass?” Lu asked as he grabbed a blob of mashed potatoes, with his bare hands no less, and plunged it into his mouth. No one noticed.

The boys looked at Lu as if he had asked if they wanted to go play with Barbies. But still, they were young boys and the temptation of a ball, grass, and the outdoors was a pulling factor in the universe.

“Maybe later, Lu,” Dan said. “I want to go back downstairs and see if we can find that key.”

Young boys are not unlike puppies in that they are most happy doing what it is they’re doing and not terribly interested in what they did yesterday or what they’ll possibly do tomorrow.

Li’s mind went from mashed-potato dull to steak-knife sharp and he thought to himself, but accidentally said aloud, “I don’t know if I trust Alastar. There’s something about the whole thing that just makes me suspicious.”

Dec’s train of thought was on the same track and he added, “When he tells us stuff, it seems like he’s not telling us everything.” He paused and thought some more, but with little result. “Maybe Lu is right, maybe we should just go play soccer and forget this whole thing.”

Dan suddenly felt alone, but also confused. How could these boys, even his own brother, not want to see what was down in the second hall?

“Dude, he’s only known us a few hours, would you tell strangers your secrets after a few hours?” Dan asked his brother, but the question was open to the table.

“I would,” Li said, trying to be annoying and succeeding.

Dan pursed his lips and shook his head slightly. Now that the others seemed less interested, he was even more determined. Were they smarter than he was? Or more cautious? Maybe he should be more careful. Did they know something he didn’t? Or were they just a little slow and he knew something they didn’t? It might have seemed like a debatable topic, but from his perspective, it was clear: he needed to convince them to come because as much as he wanted to go under the castle, he was scared to go alone.

The conversation was stalled, but Lu broke the silence by blurting out exactly what he was thinking. “I’m a little scared to go down there again,” he said. It took some guts to say your truth, especially if it might not look as cool in the eyes of the others.

“I’m a little scared, too, Lu,” Dan admitted, happy to have a partner in fear. “But do you want to go down there? Are you curious what’s in that second room?”

The older boys weren’t saying much at this point. Of course, saying they were scared in the presence of their little brothers was something they’d rather not admit to, at least not openly. Still, in this sudden bout of honesty and openness among brothers, it wasn’t the time for false bravery either.

“We’ll go down with you guys,” Dec said.

“Yeah, we’ll protect you,” Li added, but in way that sounded sincere, like a loving older brother, which he could be when given the chance.

It was easier to be an older brother to someone who wasn’t his younger brother. Li was quietly curious about Dan’s ideas about magic and a question had been bugging him since he blabbed out his wish of instant In-N-Out. They sat at their table quietly, sausages and mashed potatoes digesting in their bodies and taking up most of their energy.

“Dan, if you know so much about magic, what magical power would you have if you could choose anything?” Li asked.

Dan answered without missing a beat, “I’d have a magic ring that I could take off, put it on the ground, it would get bigger and I could step into it and I would teleport wherever I wanted.”

Li’s eyes got large and his head pulled back as he reeled from the shock. “Whoa, did you just make that up just now?”

“No, it’s what I always wish for, it’s always the same thing,” Dan said.

“Oh,” Li added. “Wow. That’s pretty cool,” he thought about it a bit more. “So where would you teleport to?”

“The second room downstairs,” Dan answered, again so quickly that one had to wonder if he hadn’t gone over the questions beforehand.

His conviction and certainty was infectious and impressive. Li liked him more and more.

“We’ll get you there,” Li said, trying to be as convincing and certain as Dan and he thought he sounded pretty good, but inside, he knew he had no idea what was going to happen next.

Well, except for the man listening to the boys’ conversation behind a pillar near their table.

He had arrived just for the last bits, but had heard ‘downstairs’ and that was enough. He could guess what they were up to and was pretty certain about who their not-so-secret friendly bartender was who was the leader of their pack. This could all work to his advantage. If they were trying to get into where he thought they were trying to get into, the time was right and they might just be the right collection of boys and energy to make it work. This could work out very well, indeed.

The large man moved easily and swiftly, but as he turned to walk out of of the dining room, Li saw the back of him and the hair on the back of his neck stood up and he felt the blood draw out of his face. He lifted his arm up and extended his index finger and whispered to his silent table. They all looked where his finger pointed.

He was barely audible, but he didn’t need to say it twice. They heard it clearly.