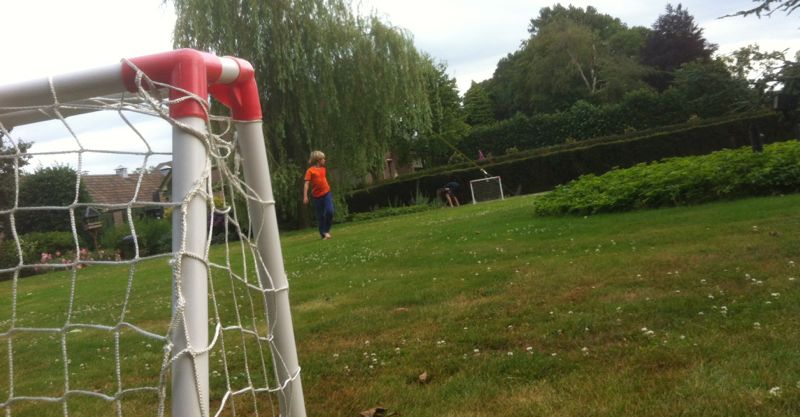 Between Argentina v. Belgium and Netherlands v. Costa Rica, a little 1-on-1 game out front.

We have a few hours between matches and it’s summer, the sun stays out until around 11 in the evening and we have a football (soccer ball), grass, and even two mini goals. Cup of tea, camera, even a laptop to write about it and I just don’t want the day to come to an end.

It’s truly all perspective. I think that sitting out front in a small town in the middle of Holland watching my boys play soccer is the place I’d most like to be on the planet. Oh, I am there. Enjoying every moment.

It could be any sport, but the World Cup brings the smallest countries out against the biggies and there’s no telling who will win. I learned from my dad that sport was one of the few things in life that is unpredictable and that’s what makes it so exciting. You really don’t know. It’s not that you just don’t want to tell your boys because you actually know, you really don’t know. No one knows. When it’s over, you’ll know.

OK, one more hour until the game. Going to play a bit on the grass out front now and see how I do against the boys.

A little football in between World Cup matches. Nervous for Holland v. Costa Rica in an hour …