Safe and sound back in their room, but has something changed?

The door closed, Alastar was gone down the hall and the boys were alone again. 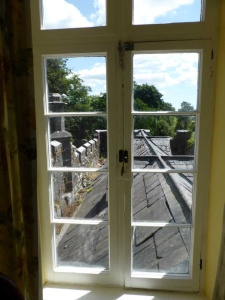 The Key to Markree Castle

“Do you think they have vanilla yogurt in the kitchen?” Lu asked.

“You can’t get it now,” Dec said, but then thought about it quickly and added, “Well, probably not.” He envisioned fries. “I’ll go with you, Lu.”

“I don’t know, but do you think we’ll have dinner with our parents and the party?” Lu asked.

“No way, we’re not invited to anything with adults this weekend,” Dec said.

“I think we’re supposed to have breakfast with our parents tomorrow morning,” Li added.

“I hope they have vanilla yogurt,” Lu said.

“I just really love vanilla yogurt,” Lu answered and since that pretty much solved any mystery, the topic was dropped. “I think about it a lot. In fact, I’m thinking about it right now.”

“Guys,” Dan started, “why did we all have our arms up and pinkies pointed at each other?”

“That’s two people pointing at you, Dan,” Dec calculated, “and just one for everyone else. Do you think it means something? How did it all happen at the same time? Could you guys see anything? I had my eyes closed and my eyes open and it didn’t matter,” Dec looked confused. “It was so dark. How did you guys know I had my arm up and my pinky out? How did you guys know what I was doing?”

“How come Alastar didn’t know what was going on? Doesn’t he live here?” Lu asked. “I totally don’t get that he has his arm up and he didn’t know why, but,” he trailed off. Lu looked like he wanted to say something else, but was hesitating. The other boys sensed it.

“Nothing!” Lu snapped at him.

“Hey Lu, do you want to go to the kitchen with me?” Dec asked.

“I think we’re supposed to stay in our room,” Dan said.

“Our parents aren’t going to be back for hours,” Li said. “But you guys do what you want, I’m going to bed.”

“I don’t think you guys should go,” Dan said.

“Where’s Killian? Is he down there?” Lu asked, concern in his voice, but Li just smiled, enjoying scaring his little brother.

“He’s just trying to scare you, Lu,” Dec stepped in and said. “I know because I do it to my brother, too.”

“Oh yeah, how about this,” Dec began, “Why did Lu and Alastar point at you? Huh? Huh?” he taunted. “Maybe you’re the one who will connect or whatever with the ghosts of the castle and you’ll be the one who disappears tomorrow night.”

“Dec has lice!” Dan yelled. “I’m not sleeping next to that bed!”

“I don’t have lice, dork, I just had an itch. But there was something next to me, I’m not kidding.”

There was no kidding going on as the boys stopped with the joking and the insults and thought about what might have held Dec’s arm down.

“Yeah, but do you trust him? Maybe he just wants us to get into that room downstairs. I don’t even understand why he thinks we can help. Why didn’t he ask the adults?” Dan wondered aloud.

“Are we taking him seriously?” Dan asked.

“Should we ask Killian?” Dec asked.

Li didn’t have an answer, just shrugged. “I don’t know, I just know.”

“OK, smart guy, why did Alastar point to Dan if you know everything?” Lu asked with sass.

“Because Dan knows what’s in the next room,” Li said while not looking at anyone, putting on his pajama shirt.

“What are you talking about?” Dan asked in serious curiosity. “How would you know what I know?”

“Just like Alastar said about Killian, he doesn’t know what he doesn’t know. But I think I know that Dan knows what Alastar doesn’t know,” Li said, now putting on his pajama shorts talking with an ease and calm that made the others uneasy and restless.

“Man, I don’t know what you’re talking about, Li,” Dec looked over to Li who was looking for his toothbrush.

Li found his toothbrush, put it in his mouth and then spoke through the toothbrush in a mumbled jumble of an answer, “I don’t know what I know, but I know that Dan knows.”

“Li, don’t be so annoying,” Lu chimed in. “How could you know what Dan knows or doesn’t know?”

“Sometimes when he’s tired at night, he just gets a little annoying,” Lu answered. “He needs a lot of sleep,” he noticed that he had the floor, so he added, “When Li eats chocolate, he turns into Dr. Jekyll and Mr. Hyde.”

“I don’t know. I don’t even know who those guys are,” Lu came back naturally and honestly. “I just heard it from my parents.”

They looked at Li. With all of the attention and with fatigue taking over his body, he decided it would be the last words of his night. “OK, dork brother, here’s what I know,” he looked at Lu and continued in a tired stare and something of a last-minute concentration on what he was saying, “I felt something weird happening down there and I don’t know what it was and I’m too tired to think about it, but there’s something going on in this castle and I don’t know what it is.”

He stopped, took in a deep breath, blinked his heavy eyes and continued, “Seriously, guys, I’m not messing around. I don’t really even know what I’m saying when I say that I know that Dan knows something. It’s weird, I don’t even know why I said that. It’s almost as if the words just come out of my mouth but I didn’t plan on saying them,” toothbrush still in his mouth, but just hanging there, he wasn’t brushing.

“I’m not playing with you,” his audience was silent and attentive. Li took the toothbrush out of his mouth to finish, “I don’t know about you guys, but I’m going back down there tomorrow night. There’s something in that next room that no one has seen for, like, forever, and I’m not scared,” he looked at Lu. “OK fine, I’m scared. But we just have to go down there.”

The three others looked at Li as he put down the toothbrush and climbed into bed, pulled up the covers and said only, “Goodnight guys.” He closed his eyes.

Lu walked over next to Li’s bed, stood next to it until Li noticed that he was there and opened his eyes and waited.