Ch. 4: Are we going to tell our parents what we’re doing? Could this day end? Please?

“Lads,” Alastar started up again. “It’s very late,” he paused. “I think we should all turn in for the night.”

“But,” Dan started but he was stopped by an outstretched hand like a policeman at a crosswalk. Alastar didn’t need to say anything more. Everything had been said that was known. There was plenty to say about the unknown, but somehow the boys had it in them to not ask anymore questions since no one seemed to have any answers.

“What about Killian,” Dec asked. “Does he know anything? Maybe he could help us?”

“Are you serious, Dec?” Li asked in both annoyance and fear. “He’s like a murderer or something.”

“He’s not a murderer,” Alastar said, although not terribly convincingly.

“But could he help us?” Li asked again. 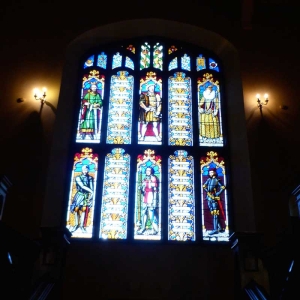 “I don’t know everything about everything, lads,” Alastar admitted. “Now I don’t dare say this, but I was about to say quickly that of course we don’t need him, but I think I’ll alter my response by saying that I hope we don’t need him. I wouldn’t want to be down here with Killian alone again.”

“We’ve been down here before, but mostly on business for the castle. We had to get something out of a storage area down here or whatnot,” Alastar seemed to be thinking back to the time. “He knows the history as well as I do, though. In fact, now that I think of it, of course I can’t know what he knows and doesn’t know, I can only know what he tells me that he knows. Who knows, maybe he knows more than I know he knows.”

Dec blinked like a sleepy infant, “Dude, I have no idea what you just said.”

“He said that he doesn’t know what Killian knows,” Li said politely and trying to be as friendly as possible. He felt a kinship with the other older brother that he wanted to grow.

“I don’t know about you guys, but I’m not coming down here with Killian,” Lu said.

Dan, although charged and psychologically ready for a full night of adventure, yawned.

Alastar took the cue. “Come on, lads, let’s get you upstairs and to bed. I’ve no idea what time it is.”

“Where are our parents anyway?” Dan asked.

“They’re probably all in the bar,” Lu said. “Let’s go find them, guys,” he said with renewed enthusiasm.

“Now, lads,” Alastar was again relieved to be the authority of the group, the one who knew what was going on, what was going to happen. “Your parents are having their party and you’re supposed to probably be in bed by now, so let’s get moving.”

The fine young lads were too tired to argue and they made their way out of the room and back out the way they came.

“Are we going to tell our parents about what we’re doing?” Dec asked as they walked down corridors under the castle.

“No way!” Li chirped in immediately and more quickly than he meant to. “I mean,” he gathered his composure, “We can tell them we were maybe down some stairs, but I think they won’t let us back down here if they know what we’re doing.”

“I don’t even know what we’re doing down here,” Lu said.

The boys made their way back through the passageways and up stairs, through doors marked Staff Only and up the hallways to their room.

“Lads,” Alastar whispered as they reached their door. He looked down the hall and then up the other direction in a not-very-subtle attempt to see if anyone was around. “Let’s keep our evening’s little escapade to ourselves. Is that alright with you?” He looked to them for accord and got some slight nods and recognition. He continued, “I think Li is right, if you tell them everything that went on tonight, they might not let you down there tomorrow night.”

“Of course we are,” Dan looked at Lu more seriously than most 9-year olds look at each other. “We have to get into the next room.”

Lu was so tired he was almost like a newborn that can’t keep even his big head from lopping over onto its side. His mind went from the possibility of vanilla yogurt to soccer to trying to find a TV that had the Eurocup on with Holland versus Spain.

“Let’s see what time the World Cup is on,” Lu replied which gave Dan at first something of a startle but then he gave in and smiled as he realized how tired he was, too.

“OK, Lu, let’s see what time the game is tomorrow night. China isn’t even the World Cup but the U.S. is,” Dec said.

“Yeah, the U.S. is pretty good this year, they beat Ghana and then tied with Portugal,” Lu added for statistic’s sake.

“Guys,” Alastar jumped in, almost dizzy from the events of the evening and way too much talk from 9-year olds. “I bid you goodnight and a superb night’s sleep. You’re going to need it,” he paused. “Tomorrow is going to be even longer than today,” he paused again, not wanting to make too much drama about it, but he also wanted them well rested. “And tomorrow night is going to be longer than tonight. At least I think it will be. I don’t know what to expect.”

“Do you think … ” Dan started, but Alastar again with the hand and the closed eyes.

“Dan, let’s talk about it tomorrow,” he said to Dan and the excited young boy understood.

“Sleep well, lads,” Alastar shook hands with each boy and looked them squarely in the eyes and waited until the gaze was returned.

As they went into their room and he closed the door, he finished the night with, “Dream about what might be beyond that door.”

Which is exactly what they were all about to do.

Meta note to the boys.