Something just happened, but no one is sure what it was.

Their eyes slowly adjusted and without rubbing them or moving at all, they all focused and saw what was happening. 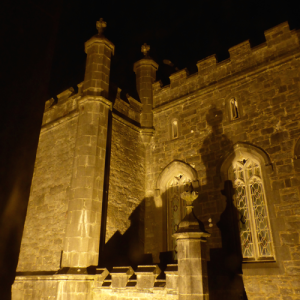 They had not communicated verbally and certainly no one could have seen anything the other did, but each has his arm up and a pinky pointed at the other. They weren’t sure whether to laugh with insanity or cry in fear so they all did nothing but move only their eyes slowly from one to another. Lu, for one, couldn’t remember the last time he had been speechless.

As the tiny light in the ceiling slowly brightened, the boys turned their stares to Alastar. Apparently, he got the arm-and-pinky memo as well as he was also pointing at one of the boys. They followed his arm down to his smallest finger and the trajectory led them clearly to just one of the boys.

Slowly, robotically and in weird synchronicity, the boys turned their heads to land on the end of the pinky’s path. Only one boy didn’t need to turn his head or move his eyes as he was now the center of everyone’s attention.

If it had been light enough, a soft blush might have been visible on his cheeks. He wasn’t sure he wanted to be the center of attention, at least not this attention. What did it mean that Alastar pointed at him. Lu was also pointing at him. He started to speak, but wasn’t sure what to say and only something of a clearing of his throat came out.

“Can I put my arm down now,” Li asked Alastar, but before Alastar could answer, the other boys jumped in on the talking and questioning without listening or hearing.

“Why am I pointing my pinky finger at Lu?” Dec asked no one in particular.

“Why do we all have our arms up at all?” Lu asked with a big emphasis on at all.

But Alastar wasn’t talking. Did he know all of the answers or was he as baffled as the boys?

“Boys,” Alastar started, but it was as if the boys had recently found their vocal cords and it was dawning on them slowly that something strange just happened.

Dec interrupted without meaning to, “Why was I pointing at Lu and why was Li pointing at me?”

Li jumped in, “Why were we pointing at anybody?”

Dan was quiet, but opened his mouth. Nothing came out.

“How did we all do this at the same time? It was completely dark. I couldn’t see or hear anything. No one told me to raise up my arm, I just did it. I don’t even know why,” Dec said.

“Alastar,” Dan started. “Why were you,” he trailed off as he wasn’t sure he wanted to know the answer. But he needed to know. “Why were you pointing at me?”

Alastar didn’t have an answer or at least not a quick one. His face said nothing, there was nothing to read in his eyes. Maybe he didn’t know either.

“No,” was all that Alastar said.

“Uh,” Li started. “Do you think we could go back upstairs where people are?” He didn’t want to say what he felt because what he was uncomfortable. But a strong uncomfortable feeling arose in him that you have when your friends bury you in the sand and you truly can’t move. You know they’ll dig you out, but you feel powerless and dependent. You’re also physically trapped, like in a straight jacket.

He wasn’t hungry, but Dec said, “Yeah, I’m hungry.” It sounded like the most logical thing to say and Alastar would absolutely let them back upstairs to eat.

Dan wanted to know more. He wasn’t hungry and he wasn’t scared. He had raised his arm up and pointed at Li without knowing how or why. The others pointed at the others, but two of them had pointed at him. So many of the possibilities of what it all meant were flying around in his head like bats: in strange patterns and hard to catch.

“Alastar,” he said in the silence as the commotion of the others died down. He waited until Alastar looked his way. “Why did we all raise our arms up? Do you know? Have you done this before? Is this all part of your big plan? Do you even have a big plan? What are we doing here? Do you know what you’re doing?” Dan stopped only because he really just had one question and he kept wording it different ways.

All of the boys looked over to Alastar and, for once, he too looked uncomfortable. He looked at each of the boys squarely in the eyes, but with no emotion or any sort of secret codes. Just a blank stare into their faces. He might have been just about to speak, but Li couldn’t wait.

“Dude, Alastar, what just happened?” Li asked in a tone that was difficult to distinguish between annoyed, scared and curious.

Again, Alastar, usually the chatty chap with a witty witticism on the ready, was speechless. He had loads of things to say, but had even more questions.