Bread, pasta, tortillas, granola, muesli, crackers … it’s what you eat everyday. How can you give that up? And why bother?

The killer is that although a baguette doesn’t look like sugar, it turns into sugar–and you crave more and more. It’s a vicious cycle–and I need to break free.

My wife was reading a Dutch magazine (with an Italian title … I know, I’m already lost) called Grazia and read about a book called Tarwebuik or Wheat Belly. (I love when random acts of events turn into action!) The article touched on Dr. William Davis’s findings after over 2,000 of his patients kicked gluten. What really resonated with me was the idea that wheat is ” … a product of genetic tinkering and agribusiness … ” and is not the simple grain it used to be–at least not by the time we put it into our mouths.

If the black box can survive a crash, why don’t they just make the whole plane out of the same stuff? — Richard Robinson

The article also mentioned how going gluten free helped people with diseases ranging from diabetes to MS to basic health issues such as sore joints and muscle aches–not to mention weight gain. Hmm, I think I have all of those. My thinking is that if it’s good for people with these issues, why not just do what they’re doing and maybe alleviate the issues before they’re bigger? Or maybe prevent them altogether?

If it’s good for them, why wouldn’t it be good for me?

We’ve been traveling and we’ve been on something close to a gluten-only diet the past several weeks. I’ve been putting on the requisite travel poundage and I need it to stop. I can’t rely on the Diet When You Get Home strategy. I’m also just into experimentation, testing, and Seeing What Happens.

Something like when I saw Fat, Sick and Nearly Dead and went on a juicing rampage and lost 24 pounds, I’m going to take having read this article as a kick in the (tight) pants to get started. I figure:

Here we go. It’s not going to be easy. But what comes from what’s easy anyway?

I’m going to go … I don’t know how long … without gluten. Let’s see what happens. I’m a firm believer in If You Don’t Measure, How Do You Know You’ve Improved? so I’m going to keep a log below.

I don’t have a traveling scale so I can’t measure weight loss, but I can measure Spring in My Step and … belt loops.

So what am I supposed to eat then?

Literally foraging through the pantry of my mother-in-law’s house like a bear. Found a jar of peanut butter. Again bear like, I opened it and ate it straight out of the jar. This is where the bear analogy stops: I used a spoon.

Whew, hungry. I am (very quickly) realizing how much gluten is in my diet. Feeling a bit weak.

What’s in the fridge that I can eat? Carrots. Bell pepper. Tomato. Ate all of those. What’s next? More of those. Then we need to go to the store. More bear scavenging with same results: peanut butter. Ouch, no cocktailnoten (nuts covered in some sort of gluten-ish yummy).

I staved off the habit of having several slices of baguette with my eggplant soup and … wow, the soup tasted all the better. Why? Because I was eating the soup, not just some bread with some soup spilled on it.

At pizza place (of all choices … ) and had goat cheese salad (savored every chunk of rich cheese) and the soup. No bites from kids’ pizzas. Ouch. Also probably tastes better because … I’m actually hungry for a change.

Put lots of old fruit into blender. Drank most of blender over the period of a day.

My wife and friend got a Hefe Weizen at lunch today and I had a white wine. Ooh, that was a tough one. Hefe Weizen is going to be tougher to pass than even a warm baguette with butter. In fact, I was even planning on having a Hefe next week in Germany with my friend.

Did have those Hefe Weizens with my friend in Germany and yes, they were good, but it was an interesting twist to the challenge. Although I enjoyed them and even had told myself beforehand that I was going to allow myself the exception, it was somehow still “cheating” a bit, but only cheating on myself. Cheating on yourself isn’t fun for anyone–you or the other you you’re cheating on. But I had my beers, had a great time with my friend, and continued gluten free the next day. In Germany with a baker on every corner, it’s been tough. Bought some rice cakes at the Rewe … some with chocolate.

CostCo (in Rancho Cordova, CA) had more gluten-free products that I’d ever seen. Was it just because I was on the lookout? Or were there really more? No, there were more. A nutty bread, multi-grain crackers, even pancake and waffle mix. Also found a nice beer at Raley’s! But after several weeks without beer, it’s always a bit amazing how fast we can adapt to new habits. Going strong gluten free! Do have a wedding tonight and we’ll see how that goes. “Could I have another salad, please?”

Wow, 2 months! Didn’t think I’d get this far–especially without having stated any sort of timeline or even a goal. So yep, I’m not eating bread (or any gluten). Great, yep. But I seem to be doing just fine eating everything else! Weight loss wasn’t my original goal, but it was one of them, or at least a hoped-for side benefit. Brown rice, more meat that I care to eat, corn tortillas, even corn chips and I have to say it’s been fun finding new gluten-free products out there in the marketplace. It’s really opened up and there are some fun ones out there. Do I “feel” better or lighter or smarter or has my skin brightened or … well, I do feel less “full.” Bread is such a killer for me: I’ll happily share an entire baguette with my youngest son. Then be bloated and full of “empty calories.”

People have asked me what I miss. The occasional beer, but less so than I thought I would. But mostly I miss a gorgeous burrito with a smooth and slightly moist flour tortilla that melts in your mouth like silk. That I miss.

Next step: keep going with it, but get back into juicing especially in the mornings–doing too much breakfast foods which I don’t really need.

I’m going to keep adding to this as I roll along. Not everyday, but if there’s something worthwhile. 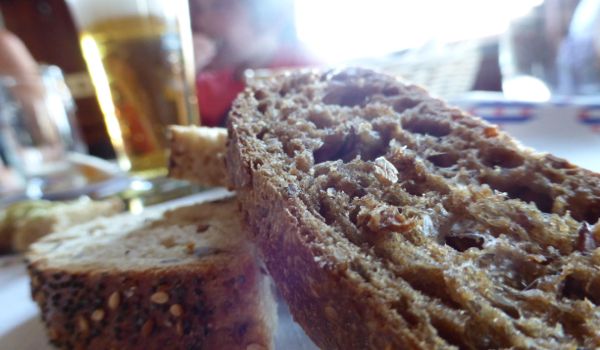 A gluten free diet can be a challenge. But there are some little-known benefits. Note beer in background! Ouch. [Makkum, Holland]