So Not Chapter Two: Hot chocolate with marshmallows or bloody dagger gallows? Nowhere to hide, everywhere to run.

The dads had to dash as the hotel staff had questions and the four boys were left alone in the grand dining room.

“So,” Dec started, “Did our dads just say what I think they said?” 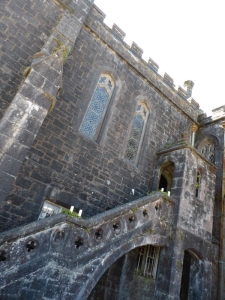 Nowhere to hide, everywhere to run. What to do? Run!

“You mean that we have no babysitter for the next four days and we have an entire castle to explore?” his brother Dan answered, almost not believing what he was saying so saying it to believe it.

“Dudes,” Li chimed in with a hand outstretched, palm down, as his blond hair fell in front of his eyes to full serious effect. “We have to be responsible.” Li was a serious young boy or at least that was the show he liked to put on. When the other three boys glared at him, he couldn’t help but let a slight smile crack.

“What!?” he yelled, annoyed but quietly enamored with the attention. He felt briefly self conscious with all of the attention and quickly put his hand through his hair in a nervous movement of glamour.

“Guys,” Dan started in, “Let’s go. I know where to go. Come on. Run!” He sprang out of his chair and started running like the castle was under siege. His straight black hair flew back as he tore through the room.

The three other boys, with no reason to object and out of fear that Dan might actually know what he was talking about, followed in line and hurried after him out of the grand ballroom. They scampered into the hallway and up a small creaky staircase, through a smaller corridor of deep red carpet, opened a door with no handle, and one after the other, like a bad cartoon of four boys piling into each other, piled into each other. Dan pointed into an open door and put a finger to his lips. They were silent.

Inside a stateroom stood an imposing figure engulfed in the chest he was looking into. He seemed to be humming to himself or maybe he was mumbling or maybe he was just chewing loudly. He was dressed in a black suit and white shirt, had grayish hair and some sort of cap like a taxi driver might wear. His bushy eyebrows twitched as he rummaged through the chest and then those same eyebrows turned over like furry caterpillars as he turned his head towards the boys all staring into the room.

It wasn’t clear whether he was going to transform into a jolly Saint Nick and welcome the boys to hot chocolate or if he would pull a bloody dagger out of his jacket and lurch towards the doorway.

“Hi,” Lu said before hot chocolate or daggers appeared. He even gave a cautious little wave.

The bushy eyebrows furrowed down and the old man squinted and it was clear to see that he couldn’t clearly see. Eye glasses were on the table.

“Who’s there?” he said and his voice came from some lower depths, gravelly and more dagger-like than chocolate-milk-like. He quickly closed the chest in such a way that made it seem like he was hiding something. “Who’s there?” came the next gurgley bark that was most certainly not a precursor to hot chocolate and most definitely no marshmallows. He fumbled for his glasses on the table.

“Bye!” Lu chirped in the same friendly tone as his first greeting and he turned and bolted. The three others, now familiar with following the first to leave, sprinted as only boys of a certain age have the energy to do.

“Hey, come back here!” came the throaty growl down the hallway, coating the walls with threat and menace. But the boys were already breaking Irish 100-meter dash records as they didn’t look back and quickly turned left, then through another door and into a quiet hallway.

A thud. A door opening and closing. A low murmur of a voice, distant but not distant enough. They looked around for a place to hide. A smaller doorway led to a narrower stairway and a door that read, Storage. Staff only.