Do you talk funny?

And if you don’t talk funny, can you learn? 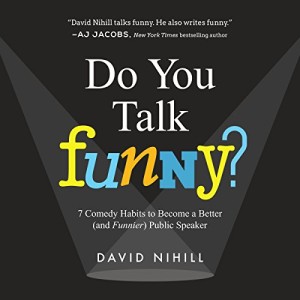 Because if you don’t talk funny, you should.

David Nihill says humor (especially in public speaking) is a skill that can be learned and improved. Stand-up comedians aren’t born with a mic in their hands and, in fact, are often not all that funny off stage.

Did you want your audience to actually, really listen to what you’re saying?

Nihill says that there is a moment when you have a clear opening where the audience is at its most attentive: it’s right after they stop laughing. At that moment, they are all ears, they are ready to hear what you will say next. Their antennae are up and on full alert. You have their attention, so take advantage of it.

Think about it, if you drone on forever about who knows what, when is that moment when they’re going to actually listen? You can yell and raise your voice, but when is that pristine moment of clarity and silence when whatever you say, they’re going to hear? It’s right after they laugh. So you need to make them laugh.

Just that point was worth the entire book right there. But then the author keeps pouring on the actionable tips and tricks, anecdotes and stories to help you become a better public speaker.

Check out Do you talk funny? on Amazon if you’re at all interested in public speaking or if you, you know, ever speak to a crowd of more than your 10-year old son while he’s brushing his teeth.

There are so many times when I highlighted sections. Here are just a few.

He also peppers humor throughout the book and sometimes you have to do a double take to catch what he just said. For example:

My old boss Roberts Diane (I have spell her name backwards to protect her identity) who disliked me so much, she spent …

It’s also full of his own self-deprecating situations, which, by the way, is one of the “must do” tips in the book.

People want to be able to associate their own experiences with yours. When you connect on their level, you’re doing well.

“Persistence is a great substitute for talent.” — Steve Martin