No Way is this Chapter Three: Out of the frying pan and into the fire. Frying pan? Is it lunch time yet? So dudes, we can do whatever we want to do. So, uh, what are we going to do?

They heard a door open somewhere behind them, so they quickly pushed each other further into the storage room. It was dark, but there was a far window letting in some dusty sun. They closed the door behind them. 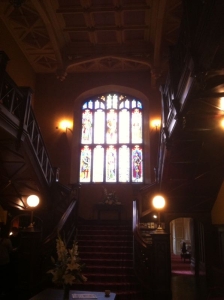 Lots of stairways, passages, long hallways with deep red carpets and … who knows what else.

“Did it lock?” Dan asked, concern in his voice. “I mean, from the inside?”

“Good,” Dan said, then thought to himself and said, “I think that’s good. Is that good?” He looked around. “Where are we?”

“Duh, the storage room,” Dec said, pointing back to the door.

“Hey, here’s a light,” Lu said and he flipped it and three lights flickered to life above. The lights had cages around them and steel hats on them, like deep in a gold mine. They were dusty and grim and the light was a soft yellow.

Linens, buckets, cleaning supplies, tools, brooms, boxes, crates and a few more doors cluttered the musty space to the point where it was hard to breathe there was so much stuff.

“Hey, where does that door go?” Dan asked no one and jumped towards it. Dec grabbed him by the collar and brought him back. Dec was only two years older, but maybe two times his size.

“Chill,” Dec said. Dan sat on the floor in a humph, obliging to his older brother’s seniority, maturity or at least his size.

“Do you think that scary guy is coming?” Lu asked as he sat down next to Dan.

“I don’t hear anything,” Li said, putting his ear to the door. He looked around to the others. They all looked at each other, unsure what to say or do next.

The boys had been tossed together by their parents for the big wedding in hopes, according to both dads, that they’d get to know their ‘buddies from China’ and ‘buddies from the States’ better. Their dads had gone to business school together long before any of these boys existed and had stayed close ever since. They were of the mindset that these big experiences where you were thrown together to work it out with strangers were where you made lifelong friends. The boys were as of yet unconvinced of the theory, although intrigued by it.

“I didn’t ask to come to this stupid castle anyway,” Lu said to no one, but never one to hold back his thoughts. He crossed his arms and if there had been a place to stomp off to, he would have stomped off to it. His mood swings were along the same trajectory as a monkey swinging through vines in the jungle: up and down, up and down, ooh, banana, down and up.

“Did you have any lunch?” Li shot back, annoyingly asking the same questions his parents did, to add parental annoying questions to his brotherly annoying tone. Lu just glared at Li and did the tongue-bunched-up-in-teeth-puckered-lips annoyed scowl.

“I didn’t want to come either,” Dan said to break up the brotherly love fest.

“My dad said it was going to be fun, that we’d have all kinds of adventures,” Lu said, drawling out the words in his best spoiled brat voice. He made little quotes with his fingers around the word ‘adventures’ to show an extra bit of drama.

“Dude,” big brother Li came back, “You need to eat something. You’re annoying.”

“Yeah, our dad said the same thing,” Dec said and he went into dad impression mode, arms flailing in exaggeration enthusiasm, “Dudes, it’s gonna be awesome possum!” he did his best dad impression with a hefty helping of sarcasm.

Li jumped in excitedly, “Wait, your dad said the same thing? That Lu is annoying? That’s classic!” Li was laughing at Lu and not with him. Li pointed at him and did his best to make his laugh genuine, but to Lu, it was mostly fake and mostly to annoy him–and it worked wonders. Lu crossed his arms and looked into his chest. His eyes watered ever so slightly.

Dec continued, but smiling through his words. “No, my dad told us, ‘It’ll be great! You can explore the castle! You’ll be hanging out with Li and Lu from San Francisco, how cool is that?!’”

“We’re cool though, right?” Li asked the jury, pretty sure that he was cool, but a little international recognition always helped.

“Yeah, sorry, I didn’t mean it that way,” Dec said. “You know what I mean, right?” They all nodded. Dec looked around to his younger brother and two new friends and gave his best effort to try to read the others and see that they truly knew what he meant. Dec was a sincere and genuine boy and wanted to make sure he wasn’t misunderstood. By the looks on the faces of the others and direct eye contact he received, Dec was convinced that they knew what he was talking about and in an instant, he felt like he even knew these boys better than he had only minutes previous.

The dust settled, the lights flickered and the castle let off distant sounds of unknown origin.

“Hey, what was that? Did you hear that?” Dan asked. They listened, but it stopped, then started, but they were probably just sounds of people elsewhere in the castle.

Li put a stop to the talk and a start to action, “So what are we going to do?”

“Can we really go anywhere we want in the castle?” Lu asked.

Dec, showing his age, answered, “Yeah, we can go outside, too, just not into the forest and not outside of the walls.” The three other boys nodded their acceptance.

“I’m hungry,” Dan announced to the others. The others sat there and looked around more, as if stating hunger might cause something to happen. No food magically appeared, no parent arrived with burgers. In fact, nothing happened at all. Interesting turn of events with no parents around.

There was a silence that no one minded. A quiet that let each boy think his own thoughts and let the thoughts that were foremost on the mind rise to the surface. Without warning or invitation, the silence was broken.

“I know,” Lu started, excited, “Let’s see if there’s an ammunitions room and we’ll find machine guns and old gatling guns and we’ll storm the guests of the wedding and throw grenades and blow everything up.”

“What does that have to do with being hungry?” Dan asked politely, but also out of curiosity to see how Lu was going to link machine guns to burgers.

Dan was quick to continue, “I have a magic ring that teleports me to the top of the castle where I’ll shoot flaming arrows at the intruders below. Bad guys are everywhere on the grounds and then we can go eat.”

The energy in the room had gone from a drab feeling of boredom and lack of initiative to one of young imaginations at work. They all sat up where they were sitting as each boy built on the story of the last. Not knowing where they were going, what they were saying or why, this is what boys of a certain age just do. It’s a mystery of nature.

All eyes were on Dec as he had yet to set his own scene. He didn’t take long, “I have a medallion that controls the stars and burning meteorites come out of the sky, but I can control their direction and they’ll land on the bad guys in the forest and they’ll all go up in flames and then … ” He was interrupted by Dan who held onto his arm and stopped him mid imagination. They were again all silent and there was not a sound to be heard for miles.

Except for one. Footsteps.

“What was that?” Dan whispered quickly. “Did you hear that? In the hall.”

“Hey, someone’s coming,” Li whispered back. “Hide!” They got up as silently as they could and hid as quickly they could. They all separated and weren’t sure where the others were. They were together, but apart.