This Can’t Be Chapter Four: Mysterious, Spooky and Dangerous? We’re in! An ally, teacher, friend, foe, or all of the above?

The boys were silent as the door handle turned slowly and the door opened. A hand reached in and knowingly turned on the light. Their hiding places weren’t good enough to remain out of view with the lights on. Like wild animals in the view of a hungry carnivore, they didn’t move a muscle and hoped they would blend into the bags of flower or maybe look something like a bucket and mop. 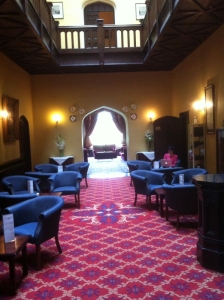 In bobbed a lanky young man who knew right where he was going and didn’t look side to side. This was a good thing as there were boys scattered pretty much everywhere side to side. But he was heading for the cleaning supplies and Lu was posing as a second mop and wasn’t doing all that great of a job of it.

“Whoa there!” the boy cried out and jumped back as he spotted Lu.

“Well, so you are, my friend,” the young man replied quickly as if he saw a 9-year old everyday in the storage room posing as a mop. “That is, you’re Lu.” He paused a moment and then continued, “And you’re also awesome, are you?”

“Absolutely,” Lu responded, somehow immediately comfortable with the stranger. But the young man was so comfortable in the space that it just made everything seem OK.

“Well, I’m Alastar and I’m, let’s see,” he searched for a word, “Ambidextrous!” he said and grinned, happy with what he came up with, but by the look on the face of the boy, wasn’t sure it was received with full recognition.

“It means I can use both my right and left hands equally skillfully,” Alastar explained.

“No, I mean, are you really ambidextrous?”

“Oh,” Alastar smiled, realizing but enjoying their conversation and lack of comprehension. He was somehow immediately at ease with the young boy. “Actually, I’m not. It was just first word that popped into my brain that started with an ‘A.'”

Lu was quiet and looked at Alastar, not sure whether to go on further about people who could use both hands equally well or just continue to stare at the storage room intruder.

“So, Lu,” Alastar continued in a more serious tone, the honeymoon now over and getting right down to business, “What exactly is your plan down here in the storage room, awesome young man? Do you frequently pose as a mop?”

“We? Who might we be?” Alastar raised an eyebrow. He was one of those people who have facial expressions that say so much with so little effort. Just the eyebrow said, ‘Is that so? There are more of you? Do tell, are they here, too?’ But Alastar said no more with his words, only that eyebrow.

If Lu meant to shield his friends from Alastar, he didn’t do a very good job by moving his eyes around the room and landing on each of the three boys hiding. If he meant to show Alastar where each boy was hiding, then it was a superb job.

“I’m Dan and I’m annoying,” Dan came out from under the sink as if auditioning for a play, complete with a wave and a slight nod of the head.

Alastar laughed hard and quick as he wasn’t quite sure what to do with such an introduction and he scanned his 17-year old memory to see if anyone he had ever met had introduced himself in such a fashion. Nope, no one.

“Dan, it’s a pleasure to meet you and I’ll be the judge about your moniker,” Alastar said.

Dan was about to ask what moniker meant when Dec came out from behind the sacks of flour.

“I’m Dec and I’m a starcaster,” Dec announced with pride.

“Dec, it’s most certainly a pleasure,” Alastar said, then paused, then continued, finger pointing in the air, “But I have to ask, do all of you always introduce yourself with a follow-up description? Is that common where you come from? It’s as if you’re all super heroes.”

The boys were even more proud that their unplanned stage entrances were so appreciated. But their super hero status didn’t do well with human conversation as they all silently soaked in the fame and attention in an Aw Shucks manner.

“Is that the lot of you then?” Alastar asked. The three boys looked to the stack of linens and out came Li.

“No, I’m Li and that’s it,” he said in such a tone it sounded like a super hero as well.

“Well, then, Li, that is it and I’m certainly honored to make your acquaintance,” Alastar said in his singsong way. His accent was Irish through and through and he used words that the boys weren’t used to and spoke as if the syllables were on a roller coaster going up and down but in the wrong places. It was like poetry, not that the boys terribly knew what poetry sounded like, but that’s what it sounded like. They circled around Alastar but didn’t know what to do next. They were caught red handed in the storage room and there was certainly a reprimand coming next.

“So yes, boys, right, now then,” Alastar seemed to put lots of words together, but was going nowhere. “There’s a wee sign on the door outside this room that says Staff Only. Let’s see, how old are you boys anyway? You can surely read and it sounds like you all speak English quite well although I sense some slight accents in there. Let’s have it, who are the readers of the group?”

“We’re 9,” Lu said and pointed to himself and Dan. “We can read really well. It says Storage Room, Staff Only on the door outside,” he continued without skipping a beat, “But we’re half Dutch, half American,” he said as he pointed to himself and his brother Li. “We speak Dutch at home, maybe that’s why you think we have an accent, but I don’t think we have an accent. If anyone has an accent, it’s you,” and he pointed at Alastar in a friendly way and bobbed his head as if he made a huge discovery that was so obvious that no one else understood.

“Excellent, Lu,” Alastar felt like a school teacher so continued in that role. “Right, we have the accents down. Yes, I’m extremely Irish, you have that right. Now then, we get onto our next lesson: reading comprehension,” he smiled. Maybe he would be one of those teachers that all of the kids loved and wanted to sit next to even after school. “So which one of you actually is employed by the Markree Castle then? In regards to the Only part of the Staff Only sign?”

Silence. No quick remarks or funny comments here. The boys knew they were in trouble and digging themselves deeper didn’t seem like a great idea.

“Just as I thought,” Alastar said as if interviewing possible suspects in the interrogation room. He didn’t say anything more and scanned each boy’s face as if reading something within them, sizing them up, debating asking his next question.

“I’ve actually heard about you boys, you know,” he continued and they perked up.

“You did?” Li asked, worried, but famous nonetheless.

“Yes, you’re the four boys who were supposed to be watched after by a local nanny, but that’s fallen through and you’re in a bit of a bind or rather, someone is in a bit of a bind, it seems that you boys have already managed to get out of that bind and, well, hmm, yes, aha, right, gotten yourself into another bit of a bind.” His hands flailed around when he spoke and his lips curled and his eyebrows danced up and down like hyper caterpillars.

There were so many words and pauses and accents floating in the air, the boys sat patiently waiting for the words to sink in to their hungry little brains.

Alastar rubbed his chin like a man of 71 not 17. He was clearly plotting something and it wasn’t clear if it was good or bad.

“Boys, I think I can help you get out of this bind. The bind being that you’re here in a place where you’re not supposed to be, obviously unsupervised and terribly in over your own heads,” Alastar went on.

“Was that English?” Lu asked and again with the bobbly head, hoping for a laugh, but got only nervous chortles from his cohorts. He had snarly teeth and needed braces, but in the meantime his teeth crawled everywhere and were especially apparent when he flared his lips back in his best possessed demon laugh. All of this was lost on Alastar who just rolled with it.

“Right, Lu, let me get to the point and I’ll do that without further ado.”

“Did you say doo?” Dan asked, trying and succeeding at being a 9-year old boy. Li punched not-his-own-brother in the arm. At this point, they were practically related it seemed that they had experienced so much together. Ah, little did they know what was coming. Poor dears.

“You see, I need your help. Seeing that you are now in my debt for intruding on my storage room, I propose that you help me with my plan,” he continued on as if this were all rehearsed, but he was winging every singsong syllable as he went. “There’s something about to happen in this castle that is mysterious, probably spooky and most certainly dangerous.” He put heavy emphasis on mysterious, spooky and dangerous just to draw the words out and draw in the boys. It worked magnificently. They were glued to his every breath. They said nothing. It wasn’t even clear they were breathing.

“Would you like to hear what I have in mind, boys?”

There was a spark of Yes, Uh huh, Please, and Yeah in the dusty room. As quickly as the words came out, they disappeared and again the boys waited with a level of patience they barely were familiar with.

Alastar smiled as he could see his plan ahead of him and how these boys could actually help. He opened his mouth to spill all, tell all, share the grand scheme of plots and strategies ahead when they all heard thuds in the hallway. Alastar recognized it first.

“Blast!” he turned his talk to a whisper. “It’s probably Killian. We need to get out of here, follow me.” Unlike when being asked to brush their teeth in the morning, there was no need for a second reminder and the boys were on his heels as he ran softly but swiftly on the balls of his feet towards a smaller door in the back of the room.

“Who’s Killian?” Dec asked as quietly as he could as they got to the door, but go no answer and only a finger to the lips from Alastar.

Alastar opened the door and let the boys go first one by one down a narrow set of stairs. Li was last and had a flicker of a thought that Alastar could possibly close the door and lock the four boys down in wherever they were going, but there was no time for judgment and he took the small steps as fast as he could. He looked up to see if Alastar was behind him or if the door was closing.[/fusion_builder_column][/fusion_builder_row][/fusion_builder_container]