In a back alley brawl, “Decide” is going to win out over “Hope.”

These are just a handful of the actions you undertake, whether consciously or unconsciously before you decide. I often think in mathematical terms, charts, and line graphs. I see all of those actions or beliefs or thoughts as heading downwards. Sure, you might think that hope is ascending in that you are hoping for something better what sounds pretty much like ascending to me, but I see it as a short-term ascension. If you’re only hoping and hoping and hoping there is no plateau there is no resting place summit of the mountain where, guess what, you make the decision to then either stop or descend or ascend.

Maybe this is only my personal interpretation of the word but I see hope, again if you allow me to use something like a line graph, as somewhere way down there. It’s more of basic needs or survival or crawling out of desperation than it is ascending from, let’s say, a four to a six or an eight to a nine on a scale of 10. Hope, in terms of numbers, is something that I see as low down possibly even in the negative, let’s say from minus two to a plus one.

Don’t get me wrong, a minus two to a plus one is an increase of three and also pulling us out of the negative. But this is where I no longer want to use hope as my ladder but move on to more efficient, effective, uplifting, and positive means of ascending further.

Hope is the kindergartner who dreams of playing kickball at recess. The decision, which can either crush or enlighten, comes from the teacher who tells the children what the game of the day is.

Although possibly a bit of a stretch, the decision could be made by the kindergartner who chooses to create his own kickball game after school on his own terms.

Hope, therefore, can be a good place to start but is a stepping stone and not the goal. Hope might open up the door to the next level of understanding and action which then could very well be the decision to decide. 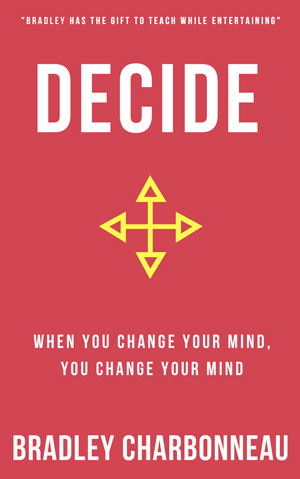